In 9 cerebral amyloid angiopathy cases, the raters identified 1146 total CMBs on GRE and 1432 CMBs on SWI. In 22 healthy control subjects, the raters identified ≥1 CMBs in 6/22 on GRE (total 9 CMBs) and 5/22 on SWI (total 19 CMBs). Among cerebral amyloid angiopathy cases, the reliability between raters for CMB counts was good for SWI (intraclass correlation coefficient, 0.87) but only moderate for GRE (intraclass correlation coefficient, 0.52).

In controls, agreement on the presence or absence of CMBs in controls was moderate to good on both SWI (κ coefficient ranged from 0.57 to 0.74 across the 3 combinations of rater pairs) and GRE (κ range, 0.31 to 0.70). A review of 114 hypointensities identified as possible CMBs indicated that increased detection and reliability on SWI was related to both increased contrast and higher resolution, allowing better discrimination of CMBs from the background and better anatomic differentiation from pial vessels.

SWI confers greater reliability as well as greater sensitivity for CMB detection compared with GRE, and should be the preferred sequence for quantifying CMB counts.

END_OF_DOCUMENT_TOKEN_TO_BE_REPLACED 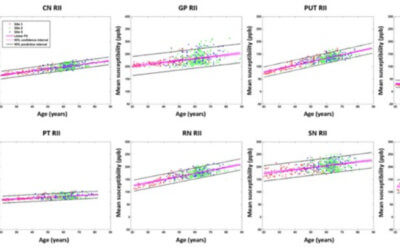 The purpose of this study was to evaluate the effect of resolution on iron content using quantitative susceptibility mapping (QSM); to verify the consistency of QSM across field strengths and manufacturers in evaluating the iron content of deep gray matter (DGM) of the human brain using subjects from multiple sites; and to establish a susceptibility baseline as a function of age for each DGM structure using both a global and regional iron analysis.

END_OF_DOCUMENT_TOKEN_TO_BE_REPLACED 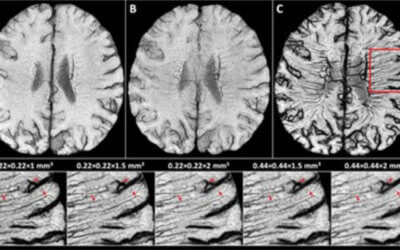 In this study, an ultra-small superparamagnetic iron oxide (USPIO) contrast agent, Ferumoxytol, was administered to induce an increase in susceptibility for both arteries and veins to help better reveal the cerebral microvasculature. The purpose of this work was to examine the presence of vascular abnormalities and vascular density in MS lesions using high-resolution susceptibility weighted imaging (SWI).

END_OF_DOCUMENT_TOKEN_TO_BE_REPLACED 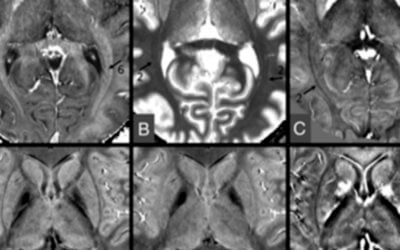 Visualization of the optic radiations is of clinical importance for diagnosing many diseases and depicting their anatomic structures for neurosurgical interventions. In this study, we quantify proton density, T1, T2*, and susceptibility of the optic radiation fiber bundles in a series of 10 healthy control participants using strategically acquired gradient echo imaging.